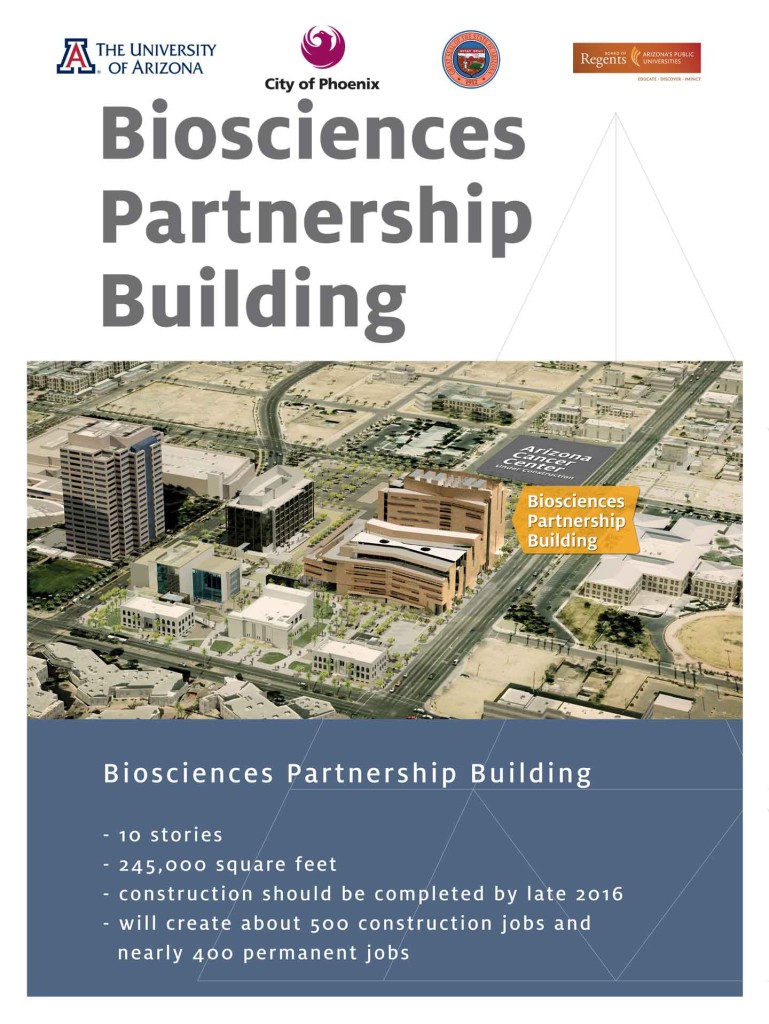 PHOENIX – The University of Arizona College of Medicine – Phoenix and the City of Phoenix announced Thursday plans to construct a 10-story, 245,000-square-foot research building, pending approval from the Arizona Board of Regents in June.

The Regents are scheduled to vote on June 6 on the Biosciences Partnership Building, which would be built immediately north of the Health Sciences Education Building near 7th Street and Fillmore in downtown Phoenix.

“This is an investment by the taxpayers,” said Ann Weaver Hart, president of the University of Arizona. “It is also part of the vision in our state to grow our economy and create the kind of jobs that will keep our graduates in Arizona.”

Under plans going to the Arizona Board of Regents, ground would be broken on the $136 million building by the end of 2014, taking about 26 months to complete. It would translate into nearly 500 jobs in design and construction and another 360 permanent jobs at buildout.

“The new biosciences building continues the progress we’ve made with the Phoenix Biomedical Campus, and it’s just another way the University of Arizona is helping to creating a better quality of life and economy in our community,” said Mayor Greg Stanton.

Plans are for the university to pursue expanded partnerships with industry, multi-disciplinary collaborations with its Phoenix partners.

“This is an important addition to downtown Phoenix and the progress we are making,” said District 8 Councilwoman Kate Gallego. “In addition to an economic effect, the groundbreaking research that will occur in this building will improve the lives of us all.”

The building would continue the steady expansion of the downtown Phoenix academic medical center after the 2012 completion of the award-winning education building and the ongoing construction of the University of Arizona Cancer Center at Dignity Health’s St. Joseph’s. The cancer center, a 220,000-square foot outpatient and research facility, is scheduled to be completed in the summer of 2015.

The funding for the building comes from the Stimulus Plan for Economic and Educational Development bonds approved by the legislature in 2008 that paid for construction of the Health Sciences Education Building and related campus improvements. The construction of this second research building was approved by the Arizona Legislature’s Joint Committee on Capital Review at the same time as the Health Sciences Education Building in 2010. However, the state board of regents still must review the project and is scheduled to do so at its June 6 meeting in Flagstaff.

“This is an exciting step in building this academic medical center in Greater Phoenix,” President Hart said. “This is the final step of approval for the remainder of the SPEED bonds that have built research infrastructure across the state.”

“Researchers will be looking for answers to most daunting questions in health care,” President Hart said. “All of this important work will have a major effect on our state – bigger breakthroughs and better health outcomes for all Arizonans.”

The Translational Genomics Research Institute is also part of the Phoenix Biomedical Campus.