SenesTech, Inc. (SNES), a developer of proprietary technologies for managing animal pest populations through fertility control is ramping up manufacturing capabilities to meet demand in 2017 and beyond for the company’s innovative new rodent control technology, ContraPest. The Company’s existing manufacturing capacity, estimated at 300,000 liters per year, is expected to double under the current expansion plans. 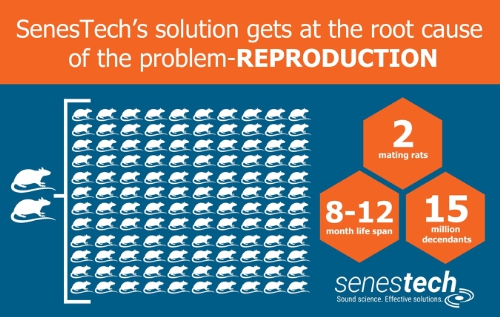 SenesTech has developed an innovative technology for managing animal pest populations through fertility control as opposed to a lethal approach.

The Company’s first fertility control product, ContraPest®, will be marketed for use initially in controlling rat infestations. ContraPest’s novel technology and approach targets the reproductive capabilities of both sexes, inducing egg loss in female rodents and impairing sperm development in males. Using proprietary bait stations, ContraPest is dispensed in a highly palatable liquid formulation that promotes sustained consumption by rodent communities. ContraPest is designed, formulated and dispensed to be safe for handlers and non-target species such as wildlife, livestock and pets, in a biodegradable product. In contrast, the historical approach to managing rodent pest populations, rodenticides, carries a high risk of environmental contamination and the poisoning of non-target animals, pets and children.

A key component of the unique manufacturing line for ContraPest is custom microencapsulating.  SenesTech has secured order of the equipment necessary for that, and expects the new manufacturing line can be deployed within three to four months.

“Our Flagstaff manufacturing line was planned and built to meet early launch capacity, however, the increasing demand from customers for ContraPest indicates a need for additional manufacturing capacity,” said Dr. Loretta P. Mayer, Chair, CEO and co-founder of SenesTech. “Our equipment suppliers have expressed their continued support for our efforts, and have pledged to provide priority access and preferential pricing on many components. Having already successfully deployed commercial-scale production capabilities, we are confident our experienced product production team is poised to bring the additional capacity online in a rapid and efficient manner.”

For more information visit the SenesTech website at www.senestech.com.