From Small Molecules to Large Biologics:  a look at the impact of  relative size and complexity and how it impacts  the biosimilar debate in the states. 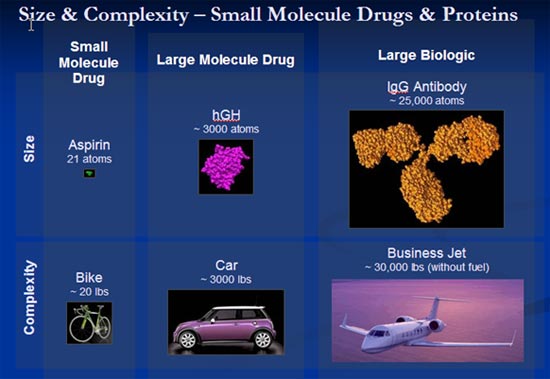 Many small molecule drugs can be taken orally, and tend to work in the body within cells. Since biologics are significantly larger in size, they are typically injected and interact within the body in the bloodstream or on the surfaces of cells, rather than within the cells. In contrast, small molecule drugs are typically composed of only 20 to 100 atoms. Small biologics, such as hormones, are typically composed of 200 to 3000 atoms, while large biologics, such as antibodies, are typically composed of 5000 to 50,000 atoms. To give a sense of size, same-scale computer models of three drugs — aspirin (a small molecule), somatropin (human growth hormone), and Herceptin (an antibody) — are presented above with an example of the relative complexity: The molecules are to scale and the objects are not, but the objects (bike, car, private jet) indicate relative size and complexity of these molecules.

Manufacturing processes for biologics differ greatly from the manufacturing processes for small molecule drugs. Small molecule drugs are generally synthesized using chemical reactions. Biologics, by comparison, are typically produced within specially engineered cells. Small molecules are well-characterized, and can be easily purified and analyzed with routine laboratory tests. Biologics — especially larger biologics -tend to be produced as diverse mixtures of molecules that differ very slightly from one another, which make them difficult to characterize. It follows that the properties of the biologic often depend directly on the nature of the manufacturing process. Furthermore, proteins have unique structural organization patterns (referred to as “folding”) that affect the way that they work in the body; even biologics that are chemically the same may have differing biological effects due to differences in the structural folding. An example of this folding effect is the difference between a raw egg and a cooked one: chemically the two are the same, but they are physically and biologically very different.

The term biosimilar refers to products that are marketed after expiration of patents, which are claimed to have similar properties to existing biologic products. Due to the complexity of biologics, a product can only be made that is similar, but not identical.

While FDA’s role in the approval of biologic and biosimilar medicines includes the designation of an interchangeable status, the policy on whether one biologic product may be substituted by dispensers when a different biologic product was prescribed is governed by state law.

In recognition of this state-level authority over biosimilar and interchangeable biological medicines, BIO developed a set of core Principles designed to  strike the appropriate balance of preserving the physician-patient relationship, protecting patients, maintaining incentives for innovation, and promoting a competitive market for biologic therapies.

Arizona’s Biosimilar Bill is currently going through the legislative  process.

This week, on February 20th at 2 PM, Senate Bill 1438 will be heard in the Health and Human Services Committee of the Arizona Senate.  The bill updates Arizona’s Pharmacy Act and sets the procedure by which a pharmacist can substitute an interchangeable biosimilar for a patient.  The bill is sponsored by Senator Kelli Ward, MD and co-sponsored by Senator Nancy Barto and Representative Kate Brophy McGee.

Key aspects of the bill include:

Why now?  There are not interchangeable biosimilars even approved by FDA yet.

The goal of bring the bill through now is to prepare for the opportunity in advance and provide  the pharmacist the ability to offer the substitute as soon as these drugs are available to the people of Arizona.  Under the current Pharmacy Act, only generics are eligible for substitution. State Legislation now opens the door to for these products by creating a process for substitution of interchangeable biosimilars as soon as the FDA is ready.

Should the Pharmacist have to  notify the Physician?

Since prior authorization could delay or restrict patient access, Arizona’s SB 1438 would only require that after the substitution has been made, the pharmacist must send the substitution information to the physician within 72 hours.

Some members of the industry believe this is unnecessary since by the time these products reach the market, the FDA will have already done due diligence.  If they do not require it, why should we?  In addition, the process of physician notification adds a new process step.   Extra steps are extra cost and some believe this is not needed.  In addition, adding extra steps could lead the  pharmacist, doctor or the patient to think the biosimilar is “not as good as” the original biologic and the biosimilars would not become widely accepted.

Those in favor of the physician notification clause feel strongly that the closest link to the patient, their doctor, be kept in the loop since biosimilars as biologics will never be truly identical as generics are.  While the variations will be slight, we are working in the realm of very precise medicines  and for some patients the results could vary (with improved results OR less effective results.) If the Doctor knows that there has been a change in the therapy, they can take this into account if they see any change in the patient’s progress.

Practice of Medicine is often a process of evaluating many variables.  When the patient condition changes (for better or worse) the doctor needs to look at all the possible variables.  The way to ensure this is to advise the doctor’s office so that the variable fo the biosimilar is in the patient chart.  Those on this  side of the debate believe that since the FDA has yet to put out the final regulations, and biosimilars are not on the market here, there is a level of uncertainty.  The 72 hour post notification could be overkill – but it  also could be important.  By starting from the more cautious approach, if we err, we err on the side of caution.  We can always decide in the future that this can be relaxed and the Pharmacy Act revised.  This is the same way that we started down a more cautious path with generic drugs years ago and today have been able to relax the requirements once patient histories demonstrated it was safe to do so.