The University of Arizona has licensed a drug that aims to shorten the lives of cancer cells to startup Reglagene. The technology, invented at the UA College of Pharmacy and the UA BIO5 Institute by Laurence Hurley, PhD, and Vijay Gokhale, PhD, has been shown to be effective in shortening the lives of target cells, essentially inducing cancer cells to grow old and die. 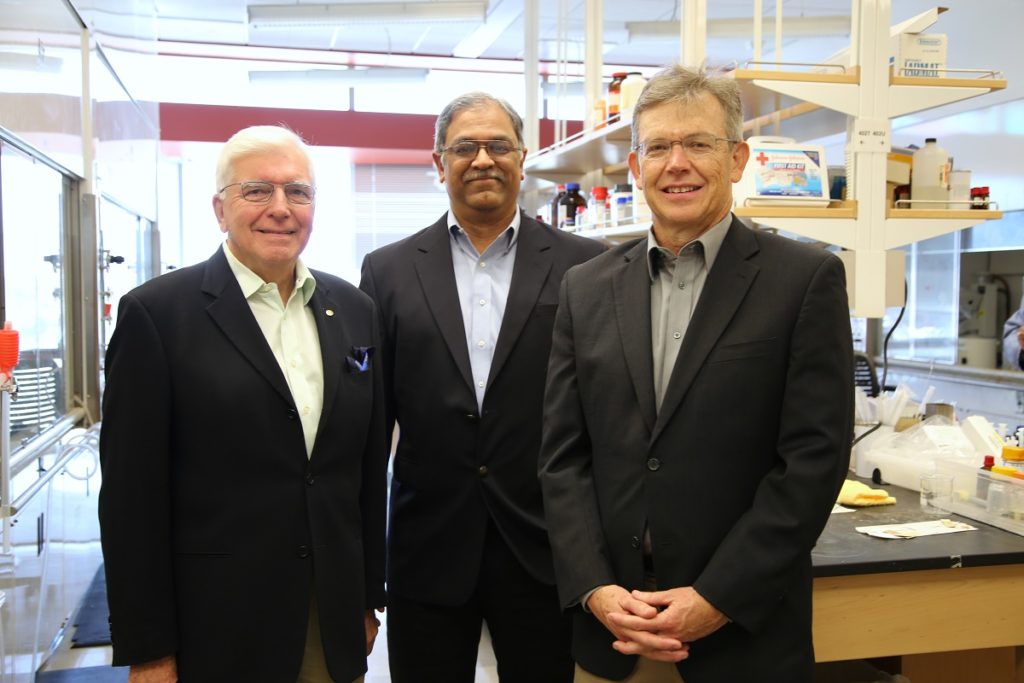 Tech Launch Arizona (TLA), the office of the University of Arizona that commercializes inventions stemming from research, worked with the team to protect the intellectual property, develop the startup strategy and license the technology to the company.

Gene expression often is controlled by molecular switches called C- and G-Quadruplexes, and these drugs target these “on” and “off” switches. C- and G-quadruplexes are gene-specific four-stranded DNA structures and this technology enables drug discovery by targeting these structures. Drs. Hurley and Gokhale are the leading experts in this kind of drug targeting.

“Our laboratory has developed the underlying technology for a number of drugs that have reached phase I/II clinical trials,” says Dr. Hurley. “This is by far the most exciting technology we have a developed during our 40 years of research.”

Previous similar technologies – which target DNA structures called telomeres that control the lifespan of cells – take several months to exert an effect in cancer cells, which is too long for cancer patients. Through regulating the expression of a protein called telomerase, this drug promotes the rapid erosion of telomeres, inducing cell aging and death in days, not months.

“We are now able to target telomerase expression in cancer with small molecule drugs,” says Dr. Gokhale, who was recognized by TLA as the 2017 UA Life Sciences Inventor of the Year. “We are excited about the potential for this technology to lead to cancer therapies.”

“Through close cooperation both on the research side as well as the business side of this process, we now have a company entering the market in a strong position to really create an impact for cancer patients,” says TLA Associate Director of Biomedical and Life Sciences Licensing Rakhi Gibbons.

Recognized as 2017 AZBIO Bioscience Researcher of the Year, Dr. Hurley has started a number of companies based on inventions developed through his research, including Cyternex, Montigen and Tetragene. He is chief scientific officer of Reglagene while continuing his research at the UA.

The third co-founder and chief executive officer of the company, Richard Austin, PhD, is a 24-year veteran of the pharmaceutical industry. He served as a medicinal chemist with GlaxoSmithKline and worked for Sanofi in Tucson. He holds a doctorate in organic chemistry and an MBA in pharmaceutical management. Dr. Hurley served on Dr. Austin’s PhD committee in the 1980’s at UT Austin, but the two only recently reconnected through their association with TLA.

In 2016, Dr. Austin became a TLA commercialization partner, one of 26 experts and entrepreneurs who collaborate with TLA on a weekly basis, providing expert feedback and industry perspective regarding new technologies under development at the UA.

“Richard was an ideal fit for Reglagene,” explains TLA Director of Business Development Joann MacMaster. “He brings the right mix of expertise, passion and leadership to the startup team. And his timing is perfect, as Reglagene just received the Flinn Foundation Bioscience Entrepreneurship award.”

At a commercialization partner meeting in May 2016, Dr. Hurley delivered a presentation about the DNA quadruplex technology. It was then that Dr. Austin was sold on the idea of leading Reglagene.

“In grad school, I was in awe of Professor Hurley,” says Austin, noting that one of the greatest strengths of the company is the team. “Today with the three of us, we have well-defined roles and have full confidence in each other. And we’ve become great friends in the process.”

TLA provided services to define, protect and license the intellectual property; bring the team together; and develop the business strategy for the startup. Reglagene was formed in November 2016 and licensed the technology in September 2017.

In FY2017, TLA helped create 15 startups based on UA inventions and licensed 105 UA inventions to new and existing companies. Reglagene is the UA’s first startup for FY2018.

Reglagene is client at the Arizona Center for Innovation, a business incubator located at the UA Tech Park which focuses on science- and technology-based startups, especially those derived from UA technologies. AzCI continues to support Reglagene in their business development and commercialization efforts.