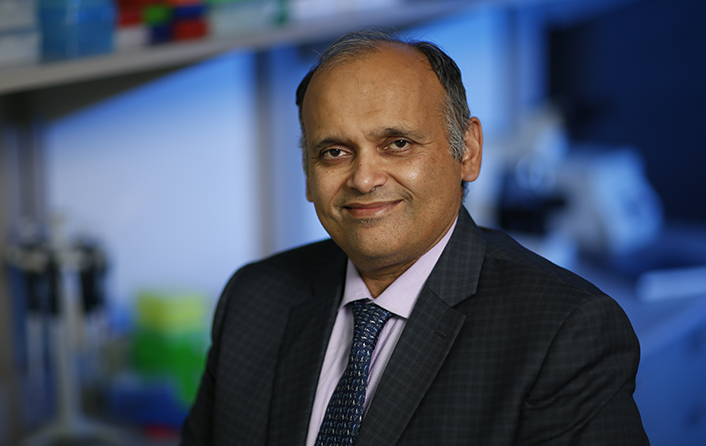 Dr. Von Hoff, who joined TGen in 2003, will continue as a Distinguished Professor and Executive Vice President, Molecular Medicine, to further his work in pancreatic cancer research and clinical trials.

“Dr. Von Hoff’s commitment to TGen and patients with pancreas cancer is second to none,” said Dr. Jeffrey Trent, TGen President and Research Director. “This transition provides him the opportunity to focus his energies solely on pancreas cancer research and treatment, a disease against which he’s made profound advances.”

Dr. Trent added: “Dr. Sharma’s appointment as Physician-in-Chief recognizes the important role he has played across TGen’s many biomedical disciplines since his arrival. He is a distinguished researcher and clinician. In addition to his leadership at TGen, he is rapidly bringing research in clinical efforts in immune treatments to the forefront of patient benefit.”

Dr. Sharma joined TGen in 2017 as Deputy Director of Clinical Sciences, Professor, and Head of TGen’s Applied Cancer Research and Drug Discovery Division, but Dr. Von Hoff knew him years before that.

“It has been a privilege to know and work with Dr. Sharma over many decades, and I look forward to his leadership in the years ahead,” said Dr. Von Hoff. “His intellect, drive, insights and innovative approaches will serve TGen — but more importantly patients — well. With this outstanding physician scientist, there is no doubt the office of Physician-in-Chief is in incredibly capable hands.”

Dr. Sharma is also a Professor of Medical Oncology at City of Hope, a world-renowned comprehensive cancer center that also treats diabetes and other life-threatening diseases, and co-leader of City of Hope’s Developmental Cancer Therapeutics Program.

Steven Rosen, M.D., Provost and Chief Scientific Officer at City of Hope, said: “Over the past three years, Dr. Sunil Sharma has proven to be a catalyst for innovative research and has successfully collaborated with others to combine research resources at TGen and City of Hope. We have every confidence that in his new role, Dr. Sharma will assist in further strengthening the leading-edge research ties between City of Hope and TGen.”

Dr. Sharma’s nearly three-decade career spans the areas of research, drug and clinical trial development. At TGen, he broadened his research and clinical portfolio beyond his specialty of gastrointestinal cancers (colon, pancreatic) to include drug development — immunotherapeutic treatments in particular — for COVID-19, Alzheimer’s disease, memory performance, and other cancers, including breast and ovarian cancer.

“I am grateful for the opportunity this new role provides, and humbled to follow in the footsteps of Dr. Von Hoff,” said Dr. Sharma. “I look forward to collaborating more broadly across the institute in search of new opportunities for patient benefit, and am committed to keeping TGen at the forefront of precision medicine.”

Prior to TGen, Dr. Sharma served as Deputy Director of Huntsman Cancer Institute (HCI) in Salt Lake City, a National Cancer Institute-designated Comprehensive Cancer Center. At Huntsman, he co-led the Experimental Therapeutics Program, where he developed new therapeutics, including image-guided and targeted drug delivery systems. He also worked as a physician in the Division of Gastrointestinal Oncology at Memorial Sloan Kettering Cancer Center in New York, and he built a phase I clinical trial program at the Nevada Cancer Institute in Las Vegas.

Nicholas J. Vogelzang, M.D., a medical oncologist with the Comprehensive Cancer Centers of Nevada, said: “Dr. Sharma has been at the forefront of anti-cancer drug development for over two decades. Having trained with Dr. Von Hoff, he expanded his innovative work at Novartis, the Nevada Cancer Institute, the Huntsman and now as Physician-in-Chief at TGen. He is a kind, yet driven, leader in the mold of Drs. Von Hoff and Trent. He understands the complex pathways that drive cancer and the immune response to it. We, in the cancer research world, are fortunate to have Dr. Sharma now leading TGen to even greater breakthroughs.”

In addition to his clinical efforts, Dr. Sharma has worked with a number of pharmaceutical companies, including Swiss-based Novartis, where he helped develop ceritinib, one of the most widely used anti-lung cancer agents; Merck & Co.’s pembrolizumab; and Bristol-Myers Squibb’s nivolumab, the latter two immunotherapy drugs, both of which help the body’s own immune system attack cancer cells.

John Sweetenham, M.D., a Professor of Medicine and Associate Director of Clinical Affairs at the University of Texas Southwestern Harold C. Simmons Comprehensive Cancer Center, said: “A distinguished physician-scientist and clinical investigator, Dr. Sharma is also a highly skilled and compassionate physician and an exceptional leader. His success in guiding drug development from discovery science to meaningful patient impact speaks for itself. Congratulations to Dr. Sharma for this recognition of his exceptional contribution, and congratulations to TGen for appointing a truly outstanding Physician-in-Chief.”

About TGen, an affiliate of City of Hope
Translational Genomics Research Institute (TGen) is a Phoenix, Arizona-based non-profit organization dedicated to conducting groundbreaking research with life-changing results. TGen is affiliated with City of Hope, a world-renowned independent research and treatment center for cancer, diabetes and other life-threatening diseases: www.cityofhope.org.  This precision medicine affiliation enables both institutes to complement each other in research and patient care, with City of Hope providing a significant clinical setting to advance scientific discoveries made by TGen. TGen is focused on helping patients with neurological disorders, cancer, diabetes and infectious diseases through cutting-edge translational research (the process of rapidly moving research toward patient benefit).  TGen physicians and scientists work to unravel the genetic components of both common and complex rare diseases in adults and children.  Working with collaborators in the scientific and medical communities worldwide, TGen makes a substantial contribution to help our patients through efficiency and effectiveness of the translational process. For more information, visit: www.tgen.org. Follow TGen on Facebook, LinkedIn and Twitter @TGen.