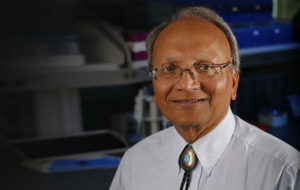 PHOENIX, Ariz. — July 23, 2018 — A young girl with severe neurological symptoms finally has a diagnosis, following the discovery by the Translational Genomics Research Institute (TGen) of a genetic mutation that likely caused the girl to experience a cascade of symptoms.

Like a train hitting a missing section of rail, a mutated copy of the gene FBXO28 is suspected of causing one of the girl’s chromosomes to go off track — a frameshift mutation — leading to a host of neurological and developmental defects, according to a TGen-led study published in the American Journal of Medical Genetics.

“As with other children who come to our clinic with rare medical conditions, we looked to give the family of this little girl a diagnosis, or cause, of her disorder so that her physicians can begin to find potential new treatments and give her a better life,” said Dr. Vinodh Narayanan, Medical Director of the TGen Center for Rare Childhood Disorders (C4RCD), and the study’s senior author. “In this case, we were able to narrow the likely problem down to a mutated copy of a single gene, FBXO28.”

There is no name for the girl’s disease, but her symptoms are similar to other children who experience gene deletions in Chromosome 1 along a region of DNA known as 1q41-q42. Children with this syndrome experience a jumble of symptoms, including developmental delay, intellectual disability, epilepsy, brain anomalies and other symptoms generally referred to as birth defects, such as delayed growth, changes in facial features, and abnormal development of fingers, toes and nails.

In addition to this little girl, who was just 3 years old when she was first seen at the TGen C4RCD clinic, researchers searched an international database to find the genomes of 35 other children with similar symptoms and gene deletions in 1q41-q42.

“What they all had in common was a deletion in a copy of this single gene, FBXO28,” said TGen Research Associate Chris Balak, who made the discovery and is the study’s lead author. “We’re always working towards finding genes that, when critically mutated, cause a disease. This is the first time FBXO28 has been directly linked to a human disease.”

The next step would be to zero in on a therapy that could reverse the effects of the FBOX28 mutation.

The paper— A novel FBXO28 frameshift mutation in a child with developmental delay, dysmorphic features, and intractable epilepsy: A second gene that may contribute to the 1q41-q42 deletion phenotype — was published July 16 in the American Journal of Medical Genetics.

Funding for study was provided by TGen and by the Wellcome Trust.

About TGen
Translational Genomics Research Institute (TGen) is a Phoenix, Arizona-based non-profit organization dedicated to conducting groundbreaking research with life changing results. TGen is focused on helping patients with neurological disorders, cancer, diabetes, and infectious diseases, through cutting edge translational research (the process of rapidly moving research towards patient benefit). TGen physicians and scientists work to unravel the genetic components of both common and rare complex diseases in adults and children. Working with collaborators in the scientific and medical communities literally worldwide, TGen makes a substantial contribution to help our patients through efficiency and effectiveness of the translational process. TGen is affiliated with City of Hope, a world-renowned independent research and cancer and diabetes treatment center: www.cityofhope.org. This precision medicine affiliation enables both institutes to complement each other in research and patient care, with City of Hope providing a significant clinical setting to advance scientific discoveries made by TGen. For more information, visit: www.tgen.org.