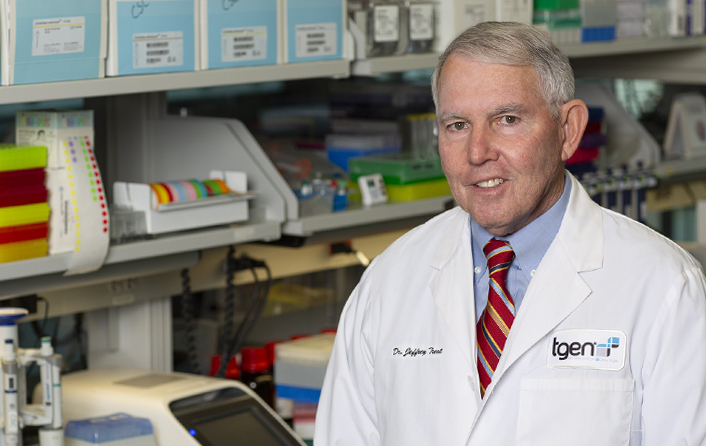 Dr. Jeffrey Trent, TGen President and Research Director, put the findings of the report in perspective: “TGen plays an important role in the local and state economy, but our progress is more importantly reflected in the precision-medicine-driven research that benefits patients, especially those in Arizona.” (Image courtesy of TGen)

PHOENIX, Ariz. — Nov. 30, 2021 — Reflecting the most substantial growth since its launch nearly two decades ago, a new report shows that the total annual economic impact on Arizona by the Translational Genomics Research Institute (TGen) now exceeds half a billion dollars.

TGen’s 2020 operational research activities alone provided a total annual economic impact on Arizona of $426 million, a more than 300% increase from 2017. Including TGen’s business spinoffs and commercialization of its research technologies brings that total to $658 million.

Pittsburgh-based international consulting firm Tripp Umbach produced the report, titled Promises Realized: The Economic and Social Impact of TGen on the State of Arizona. The firm produced similar reports for TGen in 2006, 2009, 2011, 2015 and 2018, but noted that TGen’s growth in this most recent report was among the greatest they’ve seen in three decades of measuring economic impact nationally.

“TGen has seen extraordinary growth in recent years, leading to the betterment and diversity of the Arizona economy, which was one of the original goals TGen set out to achieve,” said Paul Umbach, the Founder and President of Tripp Umbach. “Given TGen’s consistent and accelerating trajectory upward, we see no reason why TGen wouldn’t continue to improve going forward.”

He added: “TGen’s growth is among the greatest increases we have witnessed over 1,000 projects spanning 30 years of measuring economic impact.”

Dr. Jeffrey Trent, TGen President and Research Director, put the findings of the report in perspective: “TGen plays an important role in the local and state economy, but our progress is more importantly reflected in the precision-medicine-driven research that benefits patients, especially those in Arizona.”

The study revealed that for every $1 invested by Arizona, TGen research operations returned $85.20 to the state. The addition of spin-off businesses and commercialization of its research technologies brings that total to $131.54 for every $1 invested. In terms of employment, full-time, highly-compensated, knowledge-based jobs generated directly and indirectly by TGen totaled 2,179, a 167% increase from 2017.

“TGen’s impact helps create jobs, support local and state-wide businesses, and drive growth across the research and medical space, most recently in the areas of epidemiology and precision medicine,” said Tess Burleson, TGen Chief Operating Officer and President of TGen Accelerators, which is responsible for commercializing TGen’s technologies.

The Tripp Umbach report, which covers economic and social impacts from July 1, 2020, through June 30, 2021, also included these key findings:

About TGen, an affiliate of City of Hope
Translational Genomics Research Institute (TGen) is a Phoenix, Arizona-based nonprofit organization dedicated to conducting groundbreaking research with life-changing results. TGen is affiliated with City of Hope, a world-renowned independent research and treatment center for cancer, diabetes and other life-threatening diseases:  CityofHope.org.  This precision medicine affiliation enables both institutes to complement each other in research and patient care, with City of Hope providing a significant clinical setting to advance scientific discoveries made by TGen. TGen is focused on helping patients with neurological disorders, cancer, diabetes and infectious diseases through cutting-edge translational research (the process of rapidly moving research toward patient benefit). TGen physicians and scientists work to unravel the genetic components of both common and complex rare diseases in adults and children. Working with collaborators in the scientific and medical communities worldwide, TGen makes a substantial contribution to help our patients through efficiency and effectiveness of the translational process. For more information, visit: tgen.org. Follow TGen on Facebook, LinkedIn and Twitter @TGen.