In Shakespeare’s Julius Caesar, a soothsayer comes forward to warn Rome’s leader to “beware the ides of March.” For Elizabeth Holmes, president and CEO of Theranos, the ides of October may have been more prophetic as on October 15th the Wall Street Journal published the first of a series of articles taking a stab at  her company’s products and services. 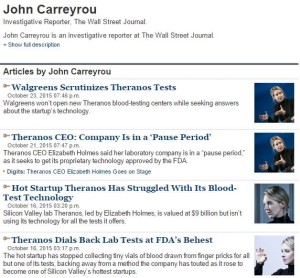 Beginning October 16, 2015, The Wall Street Journal’s John Carreyou published the first in a series articles regarding Theranos. (Click the image to visit the reporter’s page. Articles are subscriber content.)

As with the attack on Julius Caesar, there were rumblings of dissent prior to the attack and the first strike at Theranos  was not the last.   Media stories flew from multiple outlets, some repeating the questions raised by the WSJ  while others referenced new “sources” to back up their questions.  But, unlike the embattled Caesar, who did not live to fight another day, Theranos is still standing and is speaking out.

On October 15th, the company released a statement:

“Today’s Wall Street Journal story about Theranos is factually and scientifically erroneous and grounded in baseless assertions by inexperienced and disgruntled former employees and industry incumbents. Theranos presented the facts to this reporter to prove the accuracy and reliability of its tests and to directly refute these false allegations, including more than 1,000 pages of statements and documents. Disappointingly, the Journal chose to publish this article without even mentioning the facts Theranos shared that disproved the many falsehoods in the article.” (read the full statement)

On October 21st, Elizabeth Holmes attended the WSJDLive 2015 conference and addressed the claims in the article head-on in anon-stage interview.  Click here to see the WSJ video clip.

On October 22nd, Theranos posted a fact sheet on its website which states:

On October 15 and 16, The Wall Street Journal published two front-page articles about Theranos. We have heard the questions that have followed these stories and want to provide answers.

As we provide these answers, it is important not to lose sight of a few simple truths:

Theranos’ technology is reviewed by regulators, proven in the field, and praised by leaders in the industry and doctors and individuals that we serve.

We provide blood tests faster, requiring far less blood and patient discomfort, than for any test previously available—or available today from any other laboratory.

We have run more than 3.5 million tests, with patient satisfaction scores from tens of thousands of patients that consistently rate Theranos, on average, over 4.8 out of 5. To our knowledge, we are the first laboratory to publish our prices, lab proficiency-testing scores, customer satisfaction scores, guest visit times, and more on our website.

We are confident in the reliability of our tests, because we comprehensively validate the accuracy of every test we run. In addition, we are the only laboratory that has committed to submitting all of our laboratory-developed tests, including our technology, procedures, and methods, to FDA for review and clearance. FDA has already cleared one of those tests, including our underlying test systems and Nanotainer™ tubes, for use in detecting the herpes simplex virus (HSV-1). The decision summary, which describes the rigorous science behind the clearance, is available online.

The faster speed and lower cost of our tests mean that consumers, and their doctors, can monitor their health so that problems are identified early enough to be addressed by medical professionals. Our lower prices can reduce the cost to insurers, Medicare, and Medicaid by billions of dollars, and can give individuals access to critical health data they could not otherwise afford.

Our proprietary devices are making it possible to run finger-stick samples for tests that could never be run on finger-stick before. We began using our proprietary devices in our lab at the launch of our retail operations. And we initiated filings with FDA two years ago—by choice, not necessity—because we are seeking to create a new model for laboratory testing standards, and have championed FDA oversight ever since. It is the right thing, which is also the hard thing.

We are the same company offering the same services as we were last week.

The fact sheet then continues to address the concerns raised by the WSJ and others on an issue by issue basis.

Should anyone be surprised that this “fight” went viral?

Probably not. It is unlikely that even Theranos is surprised. They would  have been well aware of the rumblings.  Listening to  what folks are saying about you, good and bad,  is Marketing 101.   They may have not anticipated exactly how all of the issues would be raised, but they knew that questions were coming and, as a company that is working to disrupt the $53 billion  diagnostic and testing market, they know that the stakes are high.

Not all of the outside commentary around Theranos has been negative.  Stephen Albert Johnston, co-director of the Center of Innovations in Medicine at Arizona State University’s Biodesign Institute says the company has made breakthroughs but also has some proving to do in an article posted online on October 21st.  Steve Jurvetson, a Draper Fisher Jurvetson partner,  was supportive of  Theranos and DFJ’s venture capital investment in the company during an interview with Bloomberg’s Emily Chang.

With all of the current media attention, it’s also probably not a surprise that the FDA is taking a closer look at Theranos or that Wallgreens (home to the Theranos Wellness Centers™ in Arizona) is asking for answers. The FDA has the responsibility to fully understand the tests and nanotainer device that Theranos has submitted to the FDA for approval and Walgreens, as a public company, should be asking for answers on behalf of its consumers and shareholders. It will be up to Theranos to provide them just as any other company in this situation would be expected to do.

They are off to a good start by sharing answers with the public where anyone can find them.

Disclosure: Theranos is a member of the Arizona Bioindustry Association and was honored as 2015 Arizona Bioscience Company of the Year by AZBio.