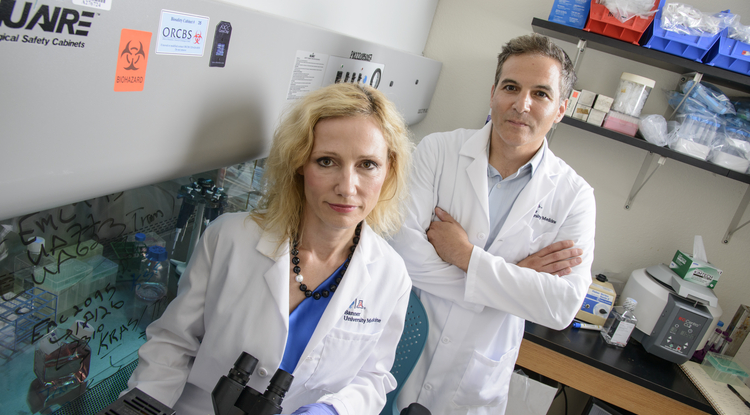 TUCSON, Ariz. – A study by scientists at the University of Arizona Cancer Center and Cancer Research UK has found that the loss of a specific tumor suppressor in “triple-negative” breast cancer provides clues about potential new approaches to treatment. The results were published on Jan. 30 in the journal Cell Reports.

Triple-negative breast cancers lack three receptors that can be targeted by drugs, which limits treatment options. Therapy can be “targeted” to be more specific to a patient’s individual tumor profile, allowing for the delivery of “personalized” medicine. Currently, patients with triple-negative breast cancer are treated with radiation or chemotherapy, and lack options for targeted forms of treatment.

“The lack of a personalized strategy to apply medicine based on specific features of a patient’s tumor remains one of the seminal therapeutic challenges in the treatment of triple-negative breast cancer,” said Dr. Witkiewicz. “Therefore, exploiting the loss of RB could represent a significant conceptual change in the way we consider treatment.”

Three promising candidates emerged from a search for drugs that could target triple-negative breast cancers with the missing RB tumor suppressor.

These tumors were susceptible to drugs that target PLK1 and AURK, proteins that are key drivers of cell division, and CHK1, a protein that is important for DNA replication. These proteins can be used as biomarkers, properties of a tumor that can be measured in blood to let doctors know more about a patient’s cancer and how best to treat it.

The studies showed that triple-negative breast tumors lacking the RB tumor suppressor harbor increased levels of these biomarkers. Developing drugs that target PLK1, AURK and CHK1 could represent a strategy for treating the 20 to 30 percent of triple-negative breast cancer patients whose tumors do not respond to targeted treatments.

“Drugs that attack PLK1 or CHK1 wreak catastrophic damage on tumor cells that have lost RB,” said Dr. Knudsen. “These studies underscore the importance of understanding fundamental features of tumor cell division and delineating how to target tumor-specific vulnerabilities with new drugs to exploit those events therapeutically.”

The authors caution that these findings, while provocative, need further exploration. The group is planning studies to investigate PLK1, AURK and CHK1 inhibitors in clinical trials to test the effectiveness of drugs that target RB-deficient triple-negative breast cancer.

“A biomarker-driven clinical trial will be critical in advancing this concept from the laboratory to the clinic,” said Dr. Witkiewicz.

Breast cancer is the most common type of cancer in the United States, with an estimated 252,710 diagnoses and 40,610 deaths in 2017, according to the National Cancer Institute. About 10 to 20 percent of breast cancers are triple-negative, and targeted treatments are necessary to decrease mortality associated with this aggressive form of the disease. Beyond triple-negative breast cancer, drugs that target RB-deficient tumors could have implications for other types of cancers in which tumors lose the RB tumor suppressor.

This research was supported by grants from the National Institutes of Health (under grant Nos. CA188650 and CA163863) and program funding from Breast Cancer Now.

About the University of Arizona Cancer Center

The University of Arizona Health Sciences is the statewide leader in biomedical research and health professions training. The UA Health Sciences includes the UA Colleges of Medicine (Phoenix and Tucson), Nursing, Pharmacy and Mel and Enid Zuckerman College of Public Health, with main campus locations in Tucson and the growing Phoenix Biomedical Campus in downtown Phoenix. From these vantage points, the UA Health Sciences reaches across the state of Arizona and the greater Southwest to provide cutting-edge health education, research, patient care and community outreach services. A major economic engine, the UA Health Sciences employs almost 5,000 people, has nearly 1,000 faculty members and garners more than $140 million in research grants and contracts annually. For more information: uahs.arizona.edu