Results may help scientists understand which older adults may have impaired immune systems, allowing early intervention to improve protection against infectious diseases, which remain a prominent killer in those over age 65.

TUCSON, Ariz. – Prior beliefs about the immune system in aging adults have been changed by the results of a University of Arizona study recently published in the Journal of Immunobiology.

Studying different subsets of the immune system’s white blood cells, along with the presence of a common and typically harmless virus, researchers at the UA College of Medicine – Tucson and collaborators found results that run against conventional wisdom. Importantly, these results may help scientists understand which older adults may have impaired immune systems, allowing early intervention to improve protection against infectious diseases, which remain a prominent killer in those over age 65. 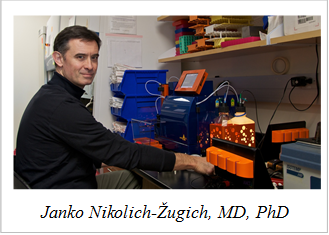 “Aging and cytomegalovirus, or CMV, infection differentially and jointly affect distinct subsets of T cells,” said Janko Nikolich-Žugich, MD, PhD, chairman of the UA Department of Immunobiology, co-director of the University of Arizona Center on Aging, Elizabeth Bowman Professor in Medical Research at the UA College of Medicine – Tucson, and a member of the UA BIO5 Institute. (T cells are types of white blood cells that defend against intracellular—within cells—pathogens, such as viruses, intracellular bacteria or parasites, such as malaria.)

The findings provide new insights into the age-related changes in the peripheral blood pool of older adults, demonstrating that aging and CMV infection exert a more complex influence on blood T cell homeostasis in humans than previously known.

“Part of the problem is that most of the population, particularly when they get older, does carry CMV,” Dr. Nikolich-Žugich said. “It’s one of the herpes viruses, which like to infect us when we’re young and then never leave us. These persistent viruses come in and start multiplying, but rarely harm people who have a functional immune system. Still, the immune system cannot eliminate CMV, which hides inside our own cells. It goes dormant, and only occasionally pops up and reactivates, usually without any signs of a disease.

“CMV is the master of stealth. It’s a large virus and it devotes more than the half of the genes it carries to striking a very delicate balance with the host, to keep things under control. Still, the immune system works hard to keep even the dormant CMV in check,” he said.

Dr. Nikolich-Žugich and his team studied 391 adults, ranging in age from 21 to 101, separated into two subgroups based upon CMV status.

Within each subgroup, the scientists then examined the different types of T cells in the adults – the naïve T cells that have not been exposed to viruses and the memory cells that have experience fighting a virus.

The study used a large group, or cohort—three to five times larger than other major studies of CMV, immunity and aging.

“We have been able to unambiguously conclude that CMV has a very distinct impact on naïve and memory cells and people with or without CMV have different types of aging for their T cell pool,” said Dr. Nikolich-Žugich.

The practical impact of the study points to a potential of evaluating patients on their individual biomarkers and predicting immune response based on the CMV status and proportion of different T cells in individual patients, noted Dr. Nikolich-Žugich. Predicting reactions to vaccines will allow researchers to re-engineer vaccines to fix people’s responses.

“The reason why we think it will be really import is when you go and vaccinate people against flu, that vaccine is pretty miserable,” said Dr. Nikolich-Žugich. “The response rate is somewhere between 17 and 51 percent in people over 65. It has not been formulated for older adults. In fact we don’t have a single vaccine on the market that’s been formulated with the knowledge of what’s wrong with the immune system in older people.

The study, “Aging and Cytomegalovirus Infection Differentially and Jointly Affect Distinct Circulating T Cell Subsets in Humans,” was published Feb. 5 online before print in The Journal of Immunology, a publication of the American Association of Immunologists, Inc.

Lead author of the study was Anne M. Wertheimer, PhD, coordinator of the Biology of Aging Research program at the UA Center on Aging and research assistant professor with the UA Department of Medicine Division of Geriatrics, General and Palliative Medicine, and UA Department of Immunobiology.

About the University of Arizona Center on Aging

The mission of the University of Arizona Center on Aging (ACOA) at the UA College of Medicine – Tucson is to promote long and healthy lives of older adults through coordinated programs in research, education, outreach and patient care. Established in 1980 as one of a network of Long Term Care Gerontology Centers authorized by the Older Americans Act, the ACOA was approved by the Arizona Board of Regents as a Center of Excellence at the Arizona Health Sciences Center in 1991. For more information, please visit the center’s website: www.aging.arizona.edu

About the UA Department of Immunobiology

The Department of Immunobiology, one of the five basic science departments at the University of Arizona College of Medicine – Tucson, conducts cutting-edge research in the development, function and regulation of the immune system in health and disease. Areas of study include the biology of microorganisms and their interaction with the immune system over the lifespan of the individual. Department faculty seek to improve and regulate the function of the immune system to reduce and prevent illness and death from infectious and autoimmune diseases and cancer. The department educates medical and other health science students, physicians and scientists in all areas of immunobiology and microbiology. For more information, please visit the website: http://immunobiology.arizona.edu