Medical device innovators got good news on December 18th as  Congress passed a two-year moratorium on a tax the industry said was limiting its growth. Companies and industry backers in Arizona and around the country have worked for years to repeal the 2.3 percent tax on revenue from medical device sales.

Originally enacted as part of the Affordable Care Act, the medical device excise tax  has been credited with limiting both job growth and innovation as funds were diverted from R&D or expansion in the US.

Suspending the tax for 2016 and 2017 sales is expected to save manufacturers $3.4 billion in tax payments, according to the Congressional Budget Office. 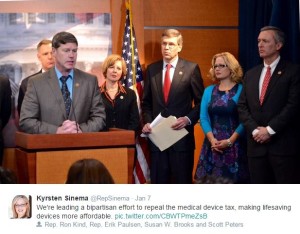 “Members of Arizona’s life science industry have been working with our Congressional Delegation over the past 5 years to support our elected leaders with the data on how the Medical Device Excise Tax was impacting both business and access to innovation,” shared AZBio president & CEO Joan Koerber-Walker. “We are deeply appreciative to our elected leaders on both sides of the aisle  in both the U.S. Senate and the U.S. House  of Representatives for their work in bringing us to this point and will continue to support them with the information they need to support a full repeal in the future.”
Members of the medical device community reiterated their support for full repeal in January of 2015  in a letter  signed by nearly 1,000 corporations and associations including AZBio.

The Advanced Medical Technology Association (AdvaMed), the Medical Imaging & Technology Alliance (MITA) and the Medical Device Manufacturers Association (MDMA) applauded Congress for passage of the two year suspension of the medical device excise tax in year-end legislation.
“America’s medical technology companies, including our nearly 2 million employees and the countless patients we serve, appreciate the broad bipartisan effort to suspend the medical device tax. This critical relief would not be possible without the tireless efforts by a large group of champions in Congress as well as among the patient, provider and research communities. Congress and the administration have demonstrated that they recognize the negative effects of this tax. We urge policymakers to continue their work to eliminate the device tax and address other factors that are threatening the health care innovation ecosystem,” said AdvaMed Board Chairman Vincent A. Forlenza, chairman, CEO and president of BD.

“We are grateful that Congress was able to come together to preserve U.S. jobs and medical innovation by delaying the device tax for two years,” said MITA Board Chairman Nelson Mendes, president and CEO of Ziehm Imaging Inc. “The bipartisan cooperation we’ve seen gives us hope that policymakers will continue their work to fully address the device tax for employees, patients and advocates across the country who have been impacted by its harmful effects.”

“MDMA thanks the tireless, bipartisan leadership in Congress that achieved this important milestone on the road towards permanently repealing the medical device tax,” said MDMA Chairman Scott Huennekens, President & CEO of Verb Surgical. “MDMA has fought against this misguided policy since it was first proposed in 2009, and while suspension of the medical device tax is a positive step, we will remain focused on repealing a policy that only serves to punish a vital sector of America’s innovation ecosystem.”