Carlo Maley, associate professor in the Biodesign Center for Biocomputing, Security and Society and director of the Arizona Cancer Evolution Center, was selected as a recipient of a $10.8M grant from the National Cancer Institute. The Breast Pre-Cancer Atlas will be an active repository for information about breast tumors, open to the scientific community to use for further analysis. 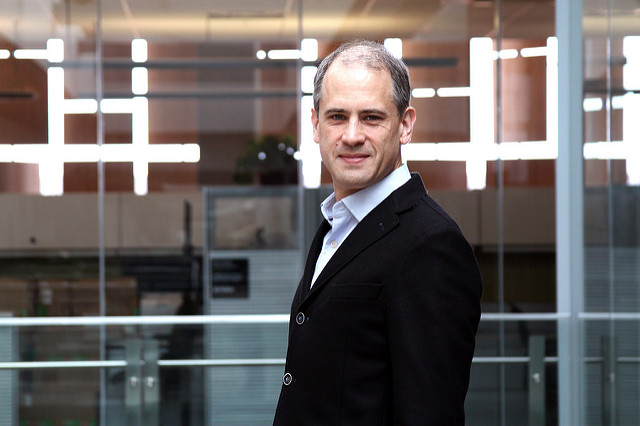 Carlo Maley, associate professor in the Biodesign Center for Biocomputing, Security and Society and director of the Arizona Cancer Evolution Center, was selected as a recipient of a $10.8M grant from the National Cancer Institute. (Photo: Biodesign Institute at ASU)

When Carlo Maley first delved into his studies on the evolution of disease, he was struck with how little the field had been explored. He decided that his skills in evolution and computational biology would be well-suited for the job.

“I went to PubMed and looked for all papers that had both cancer and evolution in the title … and I only came up with a handful of hits. It became clear that evolution is fundamental to the basic science of cancer, which explains why people have such a difficult time curing it, and yet no one was working on the evolutionary biology of cancer,” Maley said. “Biology was becoming a lot more data-driven and computational, so I decided that was a place I could really have an impact.”

Now, Maley has been awarded a $10.8M grant from the NCI to develop a Breast Pre-Cancer Atlas with Shelley Hwang at Duke University and Robert West at Stanford University.

The Breast Pre-Cancer Atlas will be an active repository for information about breast tumors, open to the scientific community to use for further analysis.

“The grant was not really driven by a scientific question like the rest of our grants are, but more of an infrastructure grant to produce the best data which will be easiest for everyone to use,” Maley said.

Eventually, this information could be used in treatment protocol. For example, it could be used to determine when and under what circumstances a pre-cancer becomes cancerous and how medical professionals should intervene.

“This is a big scientific community cooperative initiative to build up this information that we can all use to understand cancer better. It is great to have ASU being one of the players in that national effort,” Maley added.

The center’s concept was derived from the National Cancer Institute’s Cancer Genome Atlas – a compendium of genetic sequences from tumor samples. This atlas has been instrumental in helping produce new information about the progression of cancer.

Like the Cancer Genome Atlas, the Breast Pre-Cancer Atlas, will feature genetic sequences from various pre-cancerous tumor samples, but that’s not all.

“One observation is that there is a lot more to cancer than just this genome, so this is called a pre-cancer atlas, not just a genome atlas.  It will be looking at all the different proteins and the structure of the different cell types and the physical location of everything,” Maley said. “(This grant) is to boot up this whole infrastructure for laying out everything one would want to know about a pre-cancer, so not just the genetics, but the immune cells, the context, the proteins, the RNA, everything you can think of.”

Duke was chosen as one of 10 research institutions nationwide as part of the NCI’s Human Tumor Atlas Network (HTAN). Five Pre-Cancer Atlas Research Centers will be dedicated to the study of “pre-cancers,” or the pre-malignant state of tumors, and the other five will be dedicated to addressing the metastasis and potential therapeutic responses to cancers.

According to the NCI, “the overall goal of the HTAN is the mapping of pre-malignant and malignant tissue architecture at the molecular and cellular level over time to inform future cancer research and, ultimately, clinical decision-making.”

Currently, Maley’s lab studies three problems in cancer. The first is neoplastic progression, or the evolutionary dynamics that turn a benign tumor into a cancerous one. The second addresses the fact that therapies used to treat cancer today select for resistant cells, which prevent long-term cures.  Lastly, because large animals have many more cells and thus should be more prone to getting cancer, the lab studies cancer supressing mechanisms that have evolved to protect these species.

Having expertise in the evolutionary mechanisms responsible for the development of cancer, Maley was a natural choice to lead the ambitious new initiative. He will be working closely in collaboration with Shelley Hwang, a surgical oncologist at Duke and the primary investigator for the atlas, and Robert West, a pathologist at Stanford University.

Hwang’s role largely involves taking tumor samples and extracting RNA and DNA samples for sequencing and analysis, while West will work on conducting single-cell assays and extracting RNA from those singe cells. The database component will be handled by a computational biologist at Duke.

Maley will help develop software to better analyze the data collected for pre-cancers in addition to advising the other investigators on what tumor characteristics to look for.

“My role is not so much in the production of data, but in developing better ways of analyzing it,” Maley said. “We are really cancer theoreticians so we apply ideas and analyses from ecology and evolution to understand this process, which in this case, is pre-cancers or neoplastic progression. My role on the team is to give advice on what data we need to collect and how to analyze that data.”

This won’t be Maley’s first time working on such a project. Maley worked closely with Hwang on studying the pre-malignant state of ductal carcinoma in situ (DCIS), a non-invasive form of breast cancer. Tumors like DCIS raise interesting questions regarding treatment strategy and the optimal time for intervention.

“Most women, when they detect a lump, will take it out, and sometimes get chemotherapy, even when it’s benign, which is the case for DCIS,” Maley said. “There is a set of women in the COMET study that Shelley Hwang is leading which are doing ‘watchful waiting,’ where they are choosing to leave it in and check in on it regularly.”

This information would allow investigators to observe the natural progression of the tumors, providing insight on which tumors are more dangerous.

Maley doesn’t view this atlas simply as a measure of success or money – it represents the opportunity to study the evolutionary basis of cancer, all while advancing knowledge within the scientific community.

“The monetary value is a small slice of the whole grant,” he said “What’s really valuable for us is to have these different types of data that one can integrate to get a full picture of what’s going on in the tumor.”

The grant is a testament to the university’s strengths as an interdisciplinary institution.

“The reason I came to ASU was because it was the most intensely interdisciplinary university I had ever experienced,” Maley said.  “It’s really designed to promote that, and the centers we work in work to break down barriers between fields. One of the reasons we won the award was likely because of this.”