Parkinson’s disease (PD) affects 7-10 million people worldwide and is the leading movement-related disorder, causing progressive symptoms of rigidity and tremor. After Alzheimer’s, PD is the foremost neurodegenerative disease and efforts to prevent, treat or cure it have been arduous and frustrating. 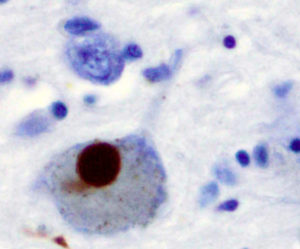 A Lewy body (stained brown) in a brain cell of the substantia nigra in Parkinson’s disease. The brown colour is positive immunohistochemistry staining for alpha-synuclein. Credit: Marvin 101

In a new study, Biodesign researchers at the ASU-Banner Neurodegenerative Disease Research Center, along with colleagues from Jiao Tong University School of Medicine, China, explore new avenues that may improve treatment for this devastating illness.

Their work, which appears in the current issue of the journal Neurobiology of Aging, focuses on alterations in the expression of genes in Parkinson’s patients. They show that subtle regulators of genes, known as epigenetic modifications, can upset the balance of gene expression, leading to a kind of autoimmune response in the brain.

The effect of the imbalance is the destruction of neurons in a vital area of the midbrain, known as the substantia nigra. This region plays a critical role in controlling balance and movement, with cell loss in the substantia nigra leading to the telltale symptoms of Parkinson’s.

The study reinforces the destructive effect of PD on neurons in the substantia nigra but goes further, identifying a potential culprit in the neuronal loss, a type of non-neuronal cell known as microglia.

Microglia are the brain’s immune cells. They patrol the central nervous system and are on ceaseless alert for foreign pathogens or insults to the brain. Microglia send out antenna-like processes that keenly sense their environment. When specific hazards are identified, microglia change from their resting state to an active form, engulfing and destroying the source of the distress, through a process known as phagocytosis, or emitting toxic factors designed to neutralize the threat.

Microglia provide essential defense for the brain and act to clear away dead cells and debris, but under conditions found in many neurodegenerative diseases, including PD, microglia can turn into weapons of mass destruction, targeting healthy neurons and accelerating the brain’s degeneration. Essentially, microglia launch a form of chemical warfare, emitting noxious factors including proinflammatory cytokines, which can accelerate neuronal destruction.

“It has been known for some time now that within pro-inflammatory environments, like the substantia nigra (SN) in PD, microglia are responsible for the constant upregulation and release of neurotoxic cytokines,” said Diego Mastroeni, a co-author of the new study. “What this study brings to the table is a specific epigenetic gene target (HDAC2) that may be inhibited to reduce the expression of genes associated with neuroinflammation.  The key will be targeting HDAC2 gene expression levels specifically in SN microglia.”

Parkinson’s is a progressive disease of the nervous system. The illness is characterized by a trembling of a limb, usually when the body is at rest. Rigidity and stiffness in the limbs and torso and progressive limitations of movement occur and the disease gradually impairs balance and coordination. In many cases, psychiatric conditions, which may include depression and hallucinations, develop and PD patients are at increased risk of memory decline and dementia.

While about 15 percent of those with Parkinson’s have a family history of the disease, which may be the result of mutations of genes linked with the disorder, the majority of cases are believed to result from a complex interplay of genetic and environmental factors.

The disease can be detected in brain tissue by the presence of concentrated inclusions within cell bodies of a pre-synaptic neural protein known as α-Synuclein. This protein may contribute to the progression of PD in a variety of ways, disrupting cellular homeostasis, undermining synaptic function and causing neuronal death. α-Synuclein also plays a role in the propagation of the disease to neighboring cells.

The new study examines a process that can induce genes to activate and translate their code into proteins or prevent them from doing so. This epigenetic activity, known as acetylation, unwraps the DNA from protein spools known as histones, making genes available for transcription into RNA and translation into protein.

Similarly, deacetylation re-wraps DNA around histones, hiding genes from the machinery of gene expression. (Histones are essential cell components for compacting DNA strands, which would measure some 6 feet in length if fully unwrapped—far too large to fit inside a cell.)

The current research shows that an enzyme known as HDAC2 (histone deacetylase 2) is overexpressed in microglial cells of the substantia nigra in the PD brain. The effect is a disruption in gene regulation and hyperactivity of microglia, which act as first responders, spewing out pro-inflammatory cytokines in response to inflammatory cues produced by PD pathology, like α-Synuclein.

The precise mechanisms of this autoimmune response and upregulation of deacetylases like HDAC2 are still murky, and much further research will be needed to understand, and hopefully interfere with this process. One promising avenue is the use of deacetylase inhibitors, which may act to restore the healthy balance of gene expression and microglial activity disrupted by neurodegenerative diseases like PD.

As the authors stress, however, broad inhibition of deacetylation comes at a steep price and can destructively interfere with vital activity and further contribute to dysregulation of gene transcription and translation. What is needed is a highly selective inhibition of HDAC2 in the region most affected by PD, (the substantia nigra) and in the cell type where upregulation of HDAC2 is most pronounced, (the microglia).

The new study was able to identify overexpression of HDAC2 in microglia using a leading-edge technology known as laser capture microdissection, which allowed the researchers to isolate individual cell classes and analyze RNA and protein levels. Microglia in the substantia nigra were found to overexpress HDAC2 in PD cases, leading to observable changes in these transcription and translation products, while other cell classes were not altered in this way.

Further, when microglia in culture were incubated with lipopolysaccharide (LPS), a potent activator of microglia, they responded with a large upregulation of HDAC2. The results provide circumstantial evidence that the inflammatory environment produced by PD acts as a trigger for deacetylation in microglia, resulting in a cascade of events spreading a wave of neuronal destruction through the critical substantia nigra region of the brain.

The results of the study offer hope that a target-specific inhibitor of HDAC2 in microglia resident in the substantia nigra may act to protect the dopamine-producing cells typically ravaged by PD.