SenesTech, Inc., an Arizona based life science company, today announced a series of significant changes and additions to its management team and board of directors. The Company believes the changes and additions to its team will help position it to commercialize its lead product candidate, ContraPest. ContraPest is an innovative technology for managing rodent pest populations through fertility as opposed to a lethal approach. SenesTech submitted ContraPest to the EPA for registration in 2015, and though there can be no assurance, the Company is hopeful of obtaining a positive determination in 2016. 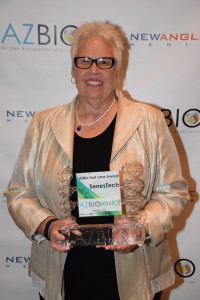 Dr. Loretta Mayer, the co-founder of SenesTech, has reassumed her role as Chief Executive Officer and Chairman of the Board. Mr.Thomas Chesterman, a veteran public company financial executive, has been appointed Executive Vice President of Finance, Treasurer and Chief Financial Officer. Mr. Grover Wickersham, the founder and Vice Chairman of S&W Seed Company (Nasdaq: SANW) has been appointed as a Director and Vice Chairman. Ms. Mara G. Aspinall, an experienced life sciences company executive, formerly President and Chief Executive Officer of Ventana Medical Systems, a member of the Roche Group and currently Chief Executive Officer of Health Catalysts, has been appointed to the Board of Directors. Mr. Anders O. Field, Jr., an internationally recognized private investor, has also been appointed to the Board of Directors, as has Mr. Matthew K. Szot, the current Executive Vice President of Finance and Chief Financial Officer of S&W Seed Company (Nasdaq: SANW). In addition, Mr. Szot will serve SenesTech as Audit Committee Chairman.

Dr. Loretta Mayer, PhD., chairman and chief executive officer of SenesTech, Inc., commented, “This is an extremely exciting time for SenesTech. The process with the EPA is moving forward and we have begun discussions with multiple potential global partners for commercializing ContraPest outside the U.S. The new additions to our team bring a tremendous set of skills to SenesTech in key areas that will help us take the leap from a research and development organization to a commercial-based sales company. I look forward to working with each of them closely to help bring our goals and expectations to reality.”

The roster of additions to SenesTech is as follows.

Tom Chesterman, SenesTech’s newly appointed Chief Financial Officer and Treasurer. From 2013 until shortly before joining SenesTech, he served as Vice President of Finance and Treasurer for General Communication, Inc., directing financial management and treasury activities for the leading communications provider in Alaska, for which he supervised the raise of $1.2 billion from public markets. Prior to that, Mr. Chesterman was Senior Vice President and Chief Financial Officer of Bionovo, Inc., where he directed all financial, business development, quality, information technology, legal and human resources activities for a development-stage NASDAQ-listed drug development company, focused on women’s health and oncology. He led three public offerings totaling $75 million. Prior to that, Mr. Chesterman was Senior Vice President, Chief Financial Officer & Secretary of Aradigm Corporation which he joined in 2002. In that capacity, he directed all financial activities for the development-stage NASDAQ-listed drug delivery technology company.  Prior to that, from 1996 to 2002, he was Vice President and Chief Financial Officer of Bio-Rad Laboratories, a NYSE-listed company, where he directed all domestic and international financial and information systems for a billion dollar, multinational manufacturer of life science research and clinical diagnostics devices, kits, and reagents.  In addition, he negotiated, financed, and integrated a $200M acquisition. Prior to that, he was Vice President/Strategy & Chief Financial Officer of Europolitan (currently named Vodafone, Sweden), where he developed and directed all financial and business planning processes for a nationwide Swedish cellular telephone (GSM) operation.  He also lead and directed a $100 million multinational equity IPO, initiated four separate credit facilities totaling $200 million, served on the Board of Directors and oversaw strategic market planning and information system development.  Mr. Chesterman holds a BA, Linguistics (with Romance Languages and Statistics), from Harvard University, and an MBA, (Finance & Accounting, Management Science), 1984, from the University of California, Davis.

Grover Wickersham, newly elected SenesTech Vice Chairman, founded the S&W Seed Company (Nasdaq: SANW) and served as Chairman of the Board from October 2009, leading its IPO in May of 2010, with sales growing during his tenure from $6 million to approximately $100 million. In December 2014 he became S&W’s Vice Chairman. Mr. Wickersham is the senior portfolio advisor of Glenbrook Capital, a fund that invests primarily in emerging growth companies. Since 2007, Mr. Wickersham has served in various capacities on behalf of Triangle T Ranch, Inc., a 12,500-acre farm in California’s Central Valley which was substantially sold to Hancock Insurance in 2010, though is still an operating farm. Mr. Wickersham has served over ten years as the Chairman of the Board of Trustees of Purisima Fund, a mutual fund advised by Ken Fisher and Fisher Investments of Woodside, California. Since early 2015, Mr. Wickersham serves as Vice Chairman of Arbor Vita Corp., which has a diagnostic test for cervical cancers and as a Director of Verseon Corporation, a U.S. company traded in London that uses “computational chemistry,” to identify therapeutic compounds. He is a member of the Board of Trustees of the U.C., Hastings Law. Mr. Wickersham has significant experience and knowledge of corporate finance and legal matters. He is a member of the California Bar and served as a practicing securities lawyer for many years, with clients including Genentech, Cree, and U-Haul. From 1978 until 1981, Mr. Wickersham was a Branch Chief in the LA Regional Office of the U.S. Securities and Exchange Commission and supervised the review of public stock offerings for emerging companies in a four State region. He holds an A.B. from the U. C. Berkeley, an MBA from Harvard Business School and a Jur.Dr. fromU.C. Hasting Law.

Mara G. Aspinall is a healthcare industry leading executive. Ms. Aspinall is the former President and Chief Executive Officer of Ventana Medical Systems, a member of the Roche Group. During her tenure, Ventana advanced its role as the leading worldwide developer and producer of cancer diagnostic products and services for delivery of personalized oncology healthcare.  Ms. Aspinall is currently the Chief Executive Officer of Health Catalysts, a consulting firm dedicated to promoting growth of early stage life science companies.  Previously, she spent 12 years with Genzyme Corporation where she held leadership roles including President of Genzyme Genetics and President of Genzyme Pharmaceuticals. At Genzyme, her businesses grew into global leaders while setting the industry standard for quality.  She was also the Founder, Chief Executive Officer and Director of On-Q-ity, a research based company focused on transforming cancer patient management through the capture of circulating tumor cells (CTCs) in a patient’s blood.  Ms. Aspinall is a Director of Safeguard Scientifics, Abcam plc and Blue Cross Blue Shield of Arizona.

Ms. Aspinall also has substantial experience in academics and public service. She currently chairs the Arizona Biosciences Board, a CEO group dedicated to improving the state’s atmosphere for technology companies. She co-founded the International School of Biomedical Diagnostics at Arizona State University and Dublin City University, the first to treat diagnostics as an independent academic discipline. She also served on the Board of the Dana Farber Cancer Institute and as Board member of Blue Cross Blue Shield Massachusetts.  She was an active member of the Secretary of Health and Human Services’ Advisory Council on Genetics in the Obama and Bush Administrations. In addition, Ms. Aspinall has global experience as the co-founder of the European Personalized Medicine Association (EPEMED).  She is a frequent industry speaker and published author.  She holds an MBA from Harvard Business School and a BA in International Relations from Tufts University.

Anders O. Field, Jr. is a former top executive of the world’s largest precious metals refining company, and is an advisor to several public and private emerging growth companies. He has over 50 years professional business experience in participating in the establishment of new business enterprises both domestically and internationally. The organizations with which Mr. Field has been associated include: Engelhard Industries, Inc; St. Clair/Field Corporation; the NASA/DARPA Institute for Advanced Computation,Moffitt Field, California; Nuko Inc.; SemIndia, Ltd., and, The Lowell Corporation, LLC, consultancy. Mr. Field’s career exposed him to projects, negotiations and interactions with corporate entities and governments in the following countries: Great Britain, India, Japan, Korea, Germany, Sweden, Italy, Spain, and Switzerland. Mr. Field is a native San Franciscan who attended Stanford University as both an undergraduate and graduate student in International Economics and Business Administration. He also attended the University of Lund, Sweden, where he furthered his studies in International Economics. He had military service in the United States Air Force Security Service stationed in Landsberg, Germany, where he was a specialist in communications intelligence.

Matthew K. Szot was elected a Director and will serve as Chairman of the Audit Committee of SenesTech. He is currently the Executive Vice President and Chief Financial Officer of S&W Seed Company (Nasdaq; SANW) where he has served since March 2010. Mr. Szot brings a wealth of knowledge in mergers and acquisitions, SEC registered financings, developing and implementing financial and operational process improvements, technical accounting, SEC reporting and compliance.  During this tenure, Mr. Szot has been instrumental in negotiating, structuring and integrating three strategic acquisitions and raising over $80 million for the company. From 2007 until 2011, Mr. Szot served as the Chief Financial Officer for Cardiff Partners, LLC, a strategic consulting company that provides executive financial services to various publicly traded and privately held companies. Prior thereto, from 2003 to 2006, Mr. Szot served as Chief Financial Officer and Secretary of Rip Curl, Inc., a market leader in wetsuit and action sports apparel products. From 1996 to 2003, Mr. Szot was a Certified Public Accountant with KPMG in the San Diego and Chicago offices and served as an Audit Manager for various publicly traded companies. Mr. Szot graduated with High Honors from the University of Illinois,Champaign-Urbana with a Bachelor of Science degree in Agricultural Economics/Accountancy. Mr. Szot is a Certified Public Accountant in the State of California.

SenesTech is a life science company that has developed an innovative technology for managing animal pest populations through fertility as opposed to a lethal approach. The Company’s first fertility control product candidate, ContraPest, will be marketed for use initially in controlling rat infestations. We believe our non-lethal approach, targeting reproduction, is more humane, less harmful to the environment, and more effective in providing a sustainable solution to pest infestations than traditional lethal pest management methods. There is currently no fertility control product approved by the Food and Drug Administration (FDA), or the Environmental Protection Agency (EPA), for the management of pest populations.  If approved by the EPA, we believe that ContraPest will establish a new paradigm in rodent control, resulting in improved performance in rodent control over rodenticides, without the negative environmental effects of rodenticides.  Once we have established our technology, we believe our innovative, proprietary drug delivery method can be adapted to provide clinical treatments to both animals and people. For more information visit the SenesTech website at www.senestech.com.