Dr. Daniel Von Hoff recognized by alumni of Columbia’s College of Physicians and Surgeons for excellence in clinical medicine 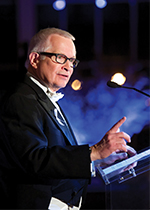 Columbia University College of Physicians and Surgeons Alumni Association will present the award May 13 in New York City to Dr. Von Hoff, a world-renowned expert in new therapies for patients with cancer.

This year marks the 250th anniversary of P&S, and its founding as the first medical school in Colonial America to award an Medical Doctorate degree.

“This recognition is especially gratifying as it is being presented by notable fellow graduates of my medical school, and I am deeply humbled and appreciative to be counted among those devoted to the welfare of patients,” said Dr. Von Hoff, who has been instrumental in developing numerous new cancer treatments. He also is a Senior Consultant-Clinical Investigations for City of Hope, Chief Scientific Officer at HonorHealth Research Institute, and Professor of Medicine at Mayo Clinic.

Dr. Von Hoff is a past director of the University of Arizona’s Arizona Cancer Center. He also is a past board member and president of the American Association for Cancer Research (AACR), a Fellow of the AACR, and recipient of the distinguished AACR Richard and Hinda Rosenthal Memorial Award. In addition, he is a past board member of the American Association of Clinical Oncology (ASCO) and winner of its prestigious David A. Karnofsky Memorial Award for outstanding contributions to patient care and treatment.

He served a six-year term on President Bush’s National Cancer Advisory Board (2004-10); is a recipient of the Wallace A. Reed M.D. Award, recognizing his accomplishments in advancing innovative cancer treatments, from the Arizona Medical Association; and received the Award of Excellence from the Hope Funds for Cancer Research, for his work in the clinical development of many new cancer treatments.

Translational Genomics Research Institute (TGen) is a Phoenix, Arizona-based non-profit organization dedicated to conducting groundbreaking research with life changing results. TGen is focused on helping patients with neurological disorders, cancer, and diabetes, through cutting edge translational research (the process of rapidly moving research towards patient benefit). TGen physicians and scientists work to unravel the genetic components of both common and rare complex diseases in adults and children. Working with collaborators in the scientific and medical communities literally worldwide, TGen makes a substantial contribution to help our patients through efficiency and effectiveness of the translational process. TGen is allied with City of Hope, a world-renowned independent research and cancer and diabetes treatment center. This precision medicine alliance enables both institutes to complement each other in reearch and patient care, with City of Hope providing a significant clinical setting to advance scientific discoveries made by TGen. For more information, visit: http://www.tgen.org. Follow TGen on Facebook, LinkedIn and Twitter @TGen.