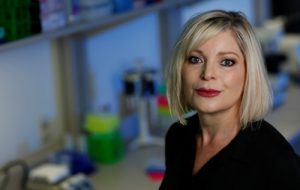 PHOENIX, Ariz. — Feb. 8, 2022 — Like abdominal cancers that remain painlessly dormant for years, potentially deadly liver disease often is only detected in its advanced stages, making it difficult to treat and resulting in poor survival.

In the search for a method of early detection, a review of scientific literature conducted by researchers at Temple University and the Translational Genomics Research Institute (TGen), an affiliate of City of Hope, suggests that a diverse group of molecules in the human genome known as long noncoding RNAs (lncRNA) could emerge as biomarkers, or indicators, of liver disease, including fatty liver disease and liver cancer.

Scientists have known about lncRNAs — nearly 60,000 have been detected in the human genome — but their molecular mechanisms, how they function and how they contribute to disease, remain poorly understood, according to the review published in the Annual Review of Pathology: Mechanisms of Disease.

With the advent of new technologies such as single-cell sequencing and CRISPR, scientists are rapidly uncovering how these molecules are essential to everything from regulation of proteins, to moderation of gene expression.

Nonalcoholic fatty liver disease (NAFLD) is the most common chronic liver condition in the U.S., and the global prevalence is growing. Its most severe form can progress to a condition called nonalcoholic steatohepatitis (NASH), and in turn lead to cirrhosis, cancer of the liver (most commonly hepatocellular carcinoma, or HCC), and death. All are difficult to diagnose and treat.

Currently, a diagnosis of liver disease is confirmed and detailed using traditional biopsies, in which a sample of the disease tissue is surgically removed; a process associated with patient discomfort, risk of complications, sampling error, and cost. Plus, it gives clinicians only a single snapshot in time of the patient’s condition.

Development of a liquid biopsy

Because lncRNAs can be detected in blood and remain stable enough for molecular analysis, a type of “liquid biopsy” could help inform physicians with a simple blood draw that could be easily repeated as often as necessary.

“The sheer number of lncRNAs in the human genome raises important questions about their potential biological significance and roles in human health and disease,” said Glenn S. Gerhard, M.D., Chair of the Department of Medical Genetics and Molecular Biochemistry at the Lewis Katz School of Medicine at Temple University.

“The evidence accumulated to date supports a role for lncRNAs as important regulators of biological pathways underlying processes related to the initiation and progression of disease,” said Dr. Gerhard, one of the review’s senior authors.

The review notes that more research is needed for a more-nuanced understanding of how lncRNAs contribute to liver disease, which liver cells are involved in the initiation of disease, and the physiological impact of lncRNA’s depending on if they are turned off or turned on.

About TGen, an affiliate of City of Hope
Translational Genomics Research Institute (TGen) is a Phoenix, Arizona-based nonprofit organization dedicated to conducting groundbreaking research with life-changing results. TGen is affiliated with City of Hope, a world-renowned independent research and treatment center for cancer, diabetes and other life-threatening diseases: CityofHope.org.  This precision medicine affiliation enables both institutes to complement each other in research and patient care, with City of Hope providing a significant clinical setting to advance scientific discoveries made by TGen. TGen is focused on helping patients with neurological disorders, cancer, diabetes and infectious diseases through cutting-edge translational research (the process of rapidly moving research toward patient benefit). TGen physicians and scientists work to unravel the genetic components of both common and complex rare diseases in adults and children. Working with collaborators in the scientific and medical communities worldwide, TGen makes a substantial contribution to help our patients through efficiency and effectiveness of the translational process. For more information, visit: tgen.org. Follow TGen on Facebook, LinkedIn and Twitter @TGen.