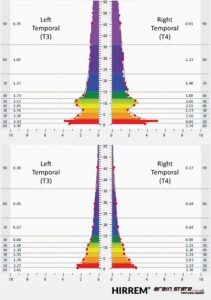 A clinical trial has found that HIRREM® closed-loop neurotechnology is more effective than placebo at reducing symptoms of insomnia, and has additional benefits for heart rate and blood pressure regulation. Findings are being presented in Boston at the annual meeting of the Associated Professional Sleep Societies, June 3-7, 2017.

The three-year study enrolled 107 adults with insomnia and randomly assigned them to receive ten sessions of either HIRREM or a placebo intervention, which consisted of tones produced by a random generator. Subjects were blinded to their group assignment, and they received equal levels of social interaction during the two-week treatment period. The trial was conducted at Wake Forest School of Medicine, Department of Neurology (Winston-Salem, North Carolina), by Prof. Charles Tegeler, M.D.

At the predetermined endpoint two months after their sessions, those who received HIRREM reported significantly greater reduction in insomnia symptoms than those who received placebo. Moreover, the HIRREM group showed marked improvements in heart rate variability and baroreflex sensitivity, whereas the placebo group showed no physiological changes. Ninety-four percent of the enrolled subjects completed all sessions and follow-up visits as scheduled, and there were no adverse events in either group.

Lee Gerdes, Founder and CEO of BST, states that “We are thrilled that our noninvasive strategy showed highly practical benefits, in an easily tolerable way without side effects, for a problem that affects up to half the U.S. population.” He further noted that Brain State Technologies is continuing innovations on HIRREM and other products for well-being, above and beyond the methodology evaluated in this study.

According to Dr. Sung Lee, Director of Research at BST, “The brain is the organ of central command. This study shows that HIRREM benefits sleep, and also helps the brain to fine tune its regulation of heart rate and blood pressure in response to changing stress levels.” He further explained that closed-loop neural interventions such as HIRREM have the advantage of precision-guidance based on real-time physiological dynamics, in contrast to reliance on symptom changes or clinical assessments.

The study was supported by a grant from a not-for-profit organization, The Susanne Marcus Collins Foundation, Inc., to the Department of Neurology at Wake Forest School of Medicine. Since 2011, a Wake Forest Baptist-BST research team has evaluated HIRREM for insomnia, symptoms of military-related traumatic stress, persisting symptoms following sports-related concussion, and other conditions, with funding from The Susanne Marcus Collins Foundation, Inc., and other independent sources including the Joint Capability Technology Demonstration Program within the Office of the Under Secretary of Defense (Acquisition, Technology, and Logistics) via a contract with the U.S. Special Operations Command, and the U.S. Army Research Office.

For more information about HIRREM and other innovations in closed-loop neurotechnology, contact Brain State Technologies at (480) 588-6840 or info@brainstatetech.com or visit:http://www.brainstatetech.com